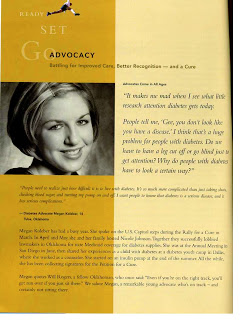 My family has always been about EDUCATION, EDUCATION, EDUCATION. People only make those comments because they don’t know better. (At least in my mind that’s why..) I mean, we (the Type 1 Diabetes community as a whole) have to deal with the typical jokes about “diabeetus” –> 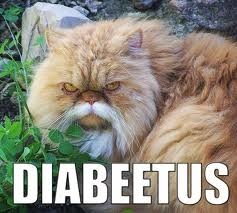 There has always been role models that I have looked up to about my diabetes:

I mean, how appropriate that Anne Rice writes about Vampires and blood? 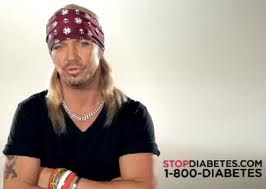 And I would hope you know, if you know me for any length of time that Bret Michaels is not only a Rock God to me, but a person that I can truly identify with and understand that ups and downs of Type 1 diabetes.But recently, I haven’t had such a great attitude about my diabetes, to be perfectly honestly. I hate this disease. I absolutely !@#$%^&*( hate it. I hate having to think about it, deal with it and know that no matter what I do that sh!t can still happen to me. I know, I’m one of blah blah million people that have it, I’m not the only one. But once in awhile I just need a release. Do you know what irritates me the most?? People (to remain nameless…) who say I want to help you, I wish I could do it for you. Thank you I appreciate your understanding, but I know that they can’t do anything. They can’t take it away, they can’t prick their finger for me, they can’t take an insulin shot for me and they can’t know the guilt that I carry every single day with this dang disease.I was told that the cure was “right around the corner” in 1988….great. Goody. Now 23 years later it’s still not here. I have hope…I really do. But today, I’m just not feeling it. I’m scared of the low blood sugars. I’m scared of not being in control of my body. I’m scared that no matter what I do to be in control, that it’s still not enough.

My career is my life…my education is everything I’ve ever wanted. I’m in the job and the field that I am absolutely in love with….Emergencies make my world go round. But the worst thing that I could imagine has happened. I want more then anything to be able to go help in a disaster (mostly help the animals…but people possibly too!) But anyway, to be able to be on OK-DMAT 1 you cannot have Type 1 Diabetes. No matter that I am completely self efficient, no matter what I do, I cannot be deployed. I feel defeated. I feel like someone pulled the rug out from under me. I feel like everyone in the Emergency Management world is pointing and laughing at me and saying….”HAHA! You just thought you wanted to make a difference”

I am just trying to deal with these thoughts one day at a time. I’m trying to be the best damn person with diabetes that you have ever met. But just today, let me HATE it.

Ok, here goes my crazy creative side – NOT. This is purely for educational value – NOT. Actually, I don’t know what this is about other then I like my almonds and it’s an easy snack for those of us with a broken pancreas!

DID YOU KNOW:The almond tree (Prunus dulcis) is native to the Middle East and is also commercially cultivated in California. An almond may also be the edible seed of the almond tree and is an important food crop. You can eat almonds whole as a snack and they have many other culinary uses, especially in desserts. Almonds contain very few carbohydrates, so the flour is commonly used in baked products for diabetics. (OH I HATE THAT WORD – Don’t you know it’s pancreas challenged, people?!) 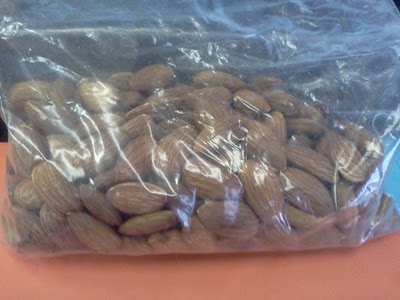 So, as I’m eating my delicious snack this morning, I just wanted to remind you of how good these little suckers are. BTW, Thank You Granma for roasting me such a delightful treat!

Two groups stand to gain – or lose – a great deal from one piece of legislation now before Congress: people with Type 1 diabetes and Native Americans with Type 1 or Type 2.    The Special Diabetes Program represents a significant proportion of the commitment from federal government to combat, cure and prevent diabetes.  Without it, diabetes research will suffer substantially.

Under the bill, research into Type 1 and programs to prevent and treat Type 2 diabetes in Native Americans (nearly 17 percent of whom have diabetes, the highest of any U.S. racial or ethnic group) would each receive $1 billion in federal funding over five years, starting in 2011.   This funding originally went into effect in 1998 and is due to expire in September 2011.  There has not been an increase in funding for this program in 6 years, meaning each research dollar is stretched thinner and thinner and funding will end next year unless Congress takes action.

This is a program with a proven track record of success.  Current funding has supported major clinical trials and other research being done on Type 1 diabetes, as well as programs that have prevented Type 2 diabetes and its complications for those most at risk.

Diabetes is an epidemic that affects nearly 24 million Americans, and another 57 million are at high risk for developing this devastating disease.  These are incredibly high numbers that must be dealt with immediately.  Here in Oklahoma 1 in 4 residents have already been diagnosed or will be in their lifetime.  It cost our state nearly $2 billion in direct and indirect costs to treat this disease last year. My family is personally affected by this disease, as my daughter, Megan Ashley was diagnosed with type 1 diabetes a month before her 3rd birthday.  That was 22 years ago and there is still NO CURE. She wears an insulin pump to stay alive and never takes “a day off” from diabetes.   We want to “Stop Diabetes”, that is why we continue to share information, act by volunteering with the American Diabetes Association, and give to the cause…………..until there is a cure!

The re-authorization of the Special Diabetes Program is currently pending before Congress.  Congress must act quickly to ensure continued advances in diabetes treatment and prevention.  24 million American lives depend on it today. 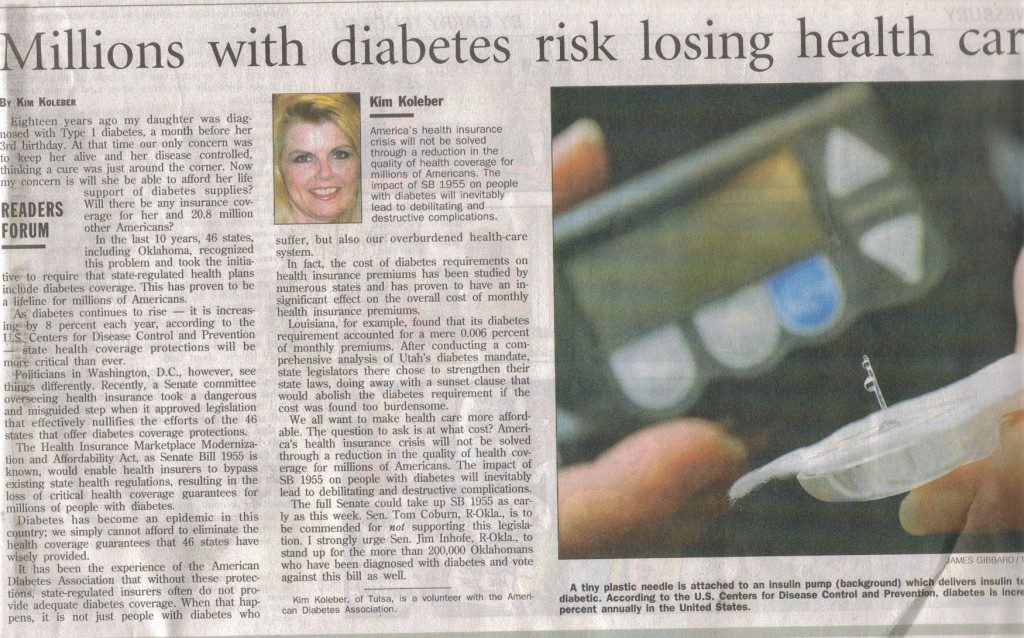 So, just as I was thinking through my life today, I realized something…Where would my life be without diabetes? Now I know no one would ask for this disease, but honestly, would I be doing what I am in my life without it? Probably not. It has opened so many doors, and made me that much more aware of the world around me. But saying that- I’ve had enough. I’m ready for a cure. I’m ready to not have to think about if I have enough syringes on me, or that my insulin stays cold all the time. I’m ready to not have to think about if my blood sugar is high before a test and what it might do to my concentration. I think I’ve learned enough from having a chronic illness…don’t you agree?

Wow – what a labor of love this site has, and is going to be! Thank you for visiting my site and I hope you check back often. This is going to be a updated newsletter/blog of what YOU can do to help us find a cure for diabetes. Please excuse if I use this as a ranting board sometimes too…For those of you who have diabetes….you will understand So, you may be asking– What is Megan’s Touch and how does it affect me? Megan’s Touch was set up with the help of my family to support the American Diabetes Association’s Research Foundation, meaning 100% of the proceeds will go DIRECTLY to diabetes research. Now, how do you support? You can donate directly through us, OR, you can purchase Mary Kay Cosmetics and we will donate all profits to the Research Foundation. We are using our family business as the vehicle to donate as much as we can for diabetes research. This is just the start–I will keep updating as much as possible as to HOW DIABETES EFFECTS YOU! Even if you don’t have, or personally know someone, it does effect you….through your tax dollars at work. Thanks again for check out my site! Look around–there are articles and interviews that I’ve done in the past related to all of my familes work for the ADA. ~j~ megan

(This article was written for a Tulsa World editorial by my amazing Mom, Kim Koleber )

Every day in the United States, more than 4,000 men, women and children hear these words from their doctor:  “I’m sorry, you have diabetes.”

And their lives change forever.

The 20th annual American Diabetes Alert Day is Tuesday, March 25, 2008.  Alert Day is a one-day, “wake-up” call to inform the American public about the seriousness of diabetes.  The American Diabetes Association encourages people to take the Diabetes Risk Test and find out if they are at risk for developing diabetes.  Sounding the Alert, is critical as sixty million Americans are unaware they have diabetes or are at risk for developing the disease.

The disease is increasing in the worldwide at an alarming rate.  Diabetes, caused by the body’s inability to produce or utilize insulin effectively to prevent a buildup of sugar in the blood, now affects 21 million Americans and roughly 250 million worldwide.  It is projected by 2025; these numbers will more than double with 50 million Americans having diabetes.  It is the fastest-growing disease in America –faster than heart disease, cancer or HIV/AIDS.

The soaring rate of people with diabetes threatens to overwhelm health systems and undermine economies. This challenge had mobilized world health leaders, who marked November 14, 2007, “World Diabetes Day”.  For the first time, the United Nations passed a resolution for member states to develop national policies to prevent and treat diabetes.

The International Diabetes Federation, which tracks global diabetes, says the disease will cause 3.8 million deaths world wide this year, nearly equal to HIV/AIDS and malaria combined.

The diabetes epidemic has no bounds – even here in Tulsa.  Children, co-workers, caregivers, minorities, and the elderly are some of the many faces of diabetes in our community.  Could you be one of these faces?

For many, diagnosis may come seven to ten years after the onset of the disease.  Therefore, early diagnosis is critical to successful treatment and delaying or preventing some of its complications such as heart disease, blindness, kidney disease, stroke, amputation and death.

What can the people of Tulsa, Oklahoma do to help stop it in its tracks?

I encourage you to take the Diabetes Risk Test and then get involved with the American Diabetes Association.  Participate in an event or educational program. Volunteer. Be a Diabetes Advocate and write our state and federal government representatives urging them to support diabetes-related legislation.

Oklahomans cannot afford to wait – especially since the Centers for Disease Control and Prevention (CDC) estimate 1 in 2 Oklahoma children will develop Diabetes in their lifetime.

The future of our community is at risk.  What are you going to do to help the many faces of diabetes? 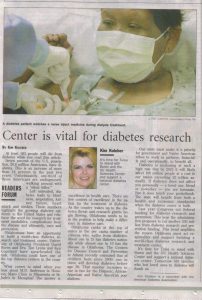