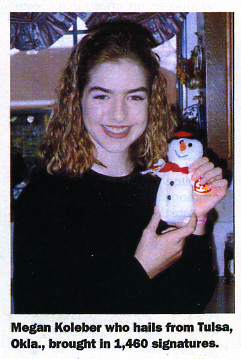 Thousands of Diabetes Forecast readers have responded to the diabetes petition to President Clinton. We were swamped with signatures. It was great!

Many of you were incredibly industrious and inspirational. Our grand prize winner, Miller Johnson of Albuquerque, N. Mex., collected an astounding 3,086 signatures. And he even counted them for us! His hard work wins him a free trip to join hundreds of diabetes advocates when we storm Capitol Hill and demand a cure on March 10. (Call 1-800-232-3472, option 6, for details.)

And who says kids or young adults can’t lend a hand? We received dozens of packages from kids and teen with diabetes. Hats off in particular to Jen Poskon of McKeesport, Pa. (2,060 signatures), and Megan Koleber of Tulsa, Okla. (1,460).

St. Elizabeth Hospital’s Center for Diabetes in Chicago wins the ADA Recognized Program contest. Debra Florio and her hardworking colleagues at St. Elizabeth beat out more than 500 other diabetes programs by collecting 2,090 signatures. Hats off to Becky Bennett and the staff of the Kingwood Medical Center in Kingwood, Tex., for collecting 1,031 signatures.

The petitions are now being prepared for delivery to President Clinton. Many, many thanks to everyone who participated in this successful campaign. Stay tuned. 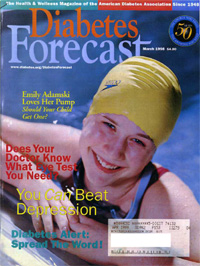