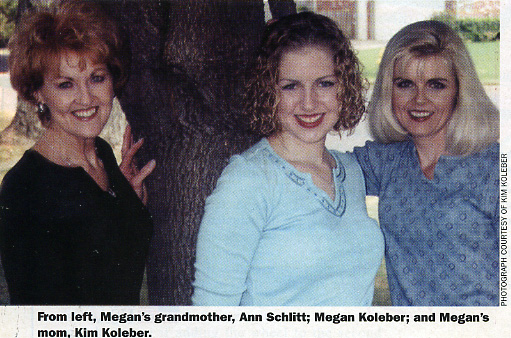 A Family Affair:
The Search For A Cure
Megan Koleber’s diabetes inspired her family to work for a cure by pledging $1 million to the ADA Research Foundation

Monday, April 4, 1988, the day after Easter, is a date I will never forget! That day my daughter, Megan, was diagnosed with diabetes – one month short of her third birthday.

After battling the flu for several weeks that March, Megan just never seemed to rally. In fact, she was growing weaker and more lethargic every passing day. I continued to blame the flu. She continued to lose weight, although her appetite was voracious. She was also urinating constantly and always tired. Today, 12 years later, I still can’t recall the day Megan was diagnosed without sorrow and pain. On that awful day, Megan was sent to the hospital immediately, her blood sugars topping 600. Our whole family was devastated. The doctor said she had diabetes, a disease we knew nothing about.

In the next few hours our family (my husband, Mel, along with aunts, uncles, and Megan’s grandparents – diabetes does affect the whole family!) began a crash course in checking blood sugars and giving shots. It was so difficult, pricking the finger of our little 2-year-old and breast feeding here at night, telling her as she was crying that we were only trying to help her feel better. The first few days after the diagnosis were a blur. Our hearts were breaking. Our 2-year-old would need insulin injections the rest of her life!

How could this be happening? We wanted to hear more than that there was only one treatment – insulin. We wanted a cure. Insulin was not a cure.

The frustration and anger over this horrible disease became our family’s sole focus. Together, we fought to overcome obstacles as they appeared. For example, our attempts to get Megan into preschool were rebuffed, but we struggled on. (The only preschool in Tulsa that would accept Megan was the Early Learning Center at Oral Roberts University, and we will be forever grateful that they did.)

With every challenge met, our faith grew stronger. Our business – Mary Kay Cosmetics – prospered, and best of all, so did Megan. We were able to cope and lead a somewhat normal life.

At “Camp New Horizons,” a diabetes camp in Dallas, Tex., where Megan’s Aunt Theresa has served as director, Megan worked with many children with diabetes. She helped us realize that all children who have diabetes are not in good control, and that we needed to get more involved.

Over the past four years our family has collected signatures on petitions to deliver to the U.S. Capitol, volunteered and helped at local, city, state, and national fundraising events, and raised public awareness through education on television, radio, and in print media. Yet we want to do more!

After learning all the facts, our minds were set – we teamed up with the American Diabetes Association to help find a cure for our Megan and those 16 million other Americans with diabetes. During the past year and a half we have worked closely with the ADA Research Foundation helping to plan and organize events to raise dollars for a cure.

This past June, Megan spoke at the Alumni Research Foundation Luncheon at the 60th Annual Meeting of the American Diabetes Association in San Antonio, Tex. As we visited with many Research Foundation alumni afterwards, our mission became evident – we needed to raise more funding for our researchers, and fast! Through prayers and many family discussions, we had a goal in mind as well as the means to reach it.

Our Mary Kay business allows us to set our own hours and gain financial independence, which, in turn, has given us the opportunity to volunteer for the Association. It also allows us to share our story across the country, since we have no territories and service customers and train unit members from coast to coast.

So, to make this work together – to work our business and volunteer – we decided to donate 100 percent of our profits to research. Our ultimate goal is $1 million. We know we will be able to reach it while keeping our priorities in place: God first, family second, and career third.

As for Megan, she is a sophomore at Jenks High School, a straight-A student, and orchestra, Key Club, and Student Council member. She plays piano and violin, is “on tow” in ballet, and takes tap and jazz.

Megan is a trooper – she’s able to handle almost any situation. She has inspired our family and taught us much. We’ve all developed a “Can Do” attitude. Like Megan, we have chosen never to use her diabetes as a crutch or excuse, but rather to use it to bring out our own God-given abilities and talents, just as Megan has. 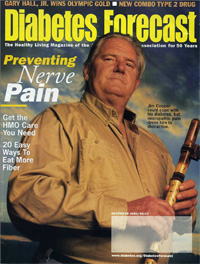