Nearly six years ago, ADA’s volunteer and staff leadership joined together to form the Research Foundation, with the goal to bring a unified focus to research efforts and to provide an avenue for donors to make major gifts to diabetes research. Gifts made to the Association’s Research Foundation are unique, in that 80 percent or more of the gift is distributed to ADA-funded researchers in the form of research awards and grants.

Major gift leads come from a variety of sources, including volunteers, direct mail, current donors, field staff, and researchers. Most major gifts – which are gifts of $10,000 or more – come from individuals. Gifts from foundations and corporations account for about 20 percent of all gifts.

One way the Research Foundation plans to reach this year’s goal of $8 million is through a unique relationship with two businesswomen from Tulsa, Oklahoma. The Koleber family has been involved with ADA in various activities, including volunteering for the Research Foundation. Their desire to help find a cure began Monday, April 4, 1988 – a day forever burned into Kim Koleber’s mind. It’s the day her daughter Megan, then one month shy of her third birthday, was diagnosed with diabetes. The Koleber family immediately began a crash course in checking blood glucose and giving shots.

“As a mother, it was awful,” says Kim. “I had to prick my two-year olds finger and tell her, as she’s crying, that I was only trying to make her feel better.”

Over the past four years, Kim, Megan, and maternal grandmother Ann Schlitt have been dedicated diabetes advocates, helping with fundraising events and local media publicity opportunities that have resulted in more public awareness about the seriousness of diabetes within their community. They’ve attended rallies, and collected more than 10,000 signatures to petition their state and federal government to spend more money for diabetes research.

Kim and Ann are both extremely successful self-employed Independent Sales Directors of Mary Kay Cosmetics, Inc. Because of their personal business successes and their commitment to fighting diabetes, they have agreed to donate 100 percent of their profits from this year’s sale of skin care and gift products to the ADA Research Foundation. Their cumulative goal: $1 million for 2001.

Their more-than-generous gesture was born during a routing walk after Mary Kay’s annual seminar last July. “Kim and I walk about six miles every day,” says Ann. “And while walking, there’s obviously lots of time to think. We bounced ideas off one another as to how to raise money for diabetes research, fast! Before we knew it, we decided on the ultimate gift – to donate all our profits to the Research Foundation.”

Steering people to a specially designed website – linked to ADA’s Internet homepage – is just one strategy of this drive toward $1 million. Chris West of LPG Design in Wichita, Kansas created, free-of-charge, a logo for this fundraiser called Megan’s Touch. The logo links to a webpage that provides a brief history or the Kolebers and their involvement with the ADA.

The Megan’s Touch logo is a dancing hibiscus-like flower whose negative space depicts a dancing figure – Megan, a dancer herself. This image also being used as an email greeting to reach those not specifically searching for ADA’s website. The greeting will link the email recipient to ADA’s website and the Mary Kay website, so when people buy online, every purchase made guarantees that all profits of toward diabetes research. To purchase products, visit www.diabetes.org/ada/koleber.asp, or call 1-866-ADA-MKAY.

Currently a sophomore in high school, Megan has set her sights on law school and becoming a corporate attorney. “As an advocate for ADA, I will always fight for improved care and, of course, a cure for diabetes,” says Megan. “One of my role models is Shereen Arent, an attorney in ADA’s Government Relations and Advocacy Division. I truly admire her work in helping people with diabetes. Plus, advocacy and the Research Foundation go hand-in-hand. I intend to lend a helping hand in both arenas.”

A side benefit of this campaign is to have other companies use the Mary Kay/ADA relationship as a model for giving back to the diabetes community. And that’s just fine with the Kolebers.

“Once our goal of $1 million is accomplished,” says Kim, “it won’t stop there. I don’t intend to stop raising money for diabetes research until the good Lord takes me, or a cure is found.” 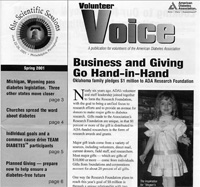