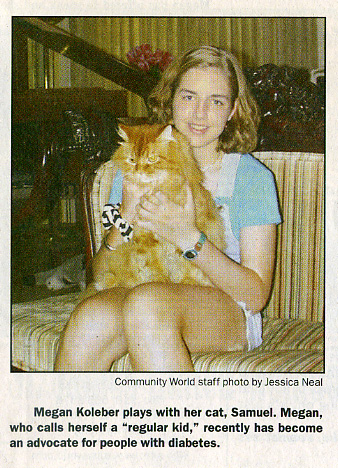 But throughout the 13-year-old’s day she is reminded that she is different. Four times a day Megan must check her blood sugar and give herself insulin injections three times a day, Megan is diabetic.

It’s a heavy load for a new teenager, but she seems to take it all in stride.

In addition Megan has become Oklahoma’s newest advocate, speaking out at school, luncheons and meetings about the need for financial support to help find a cure for diabetes.

“My pet peeve is when people say, ‘You don’t look like you have diabetes,’” Megan said. “Well, what is someone with diabetes supposed to look like?”

The South Tulsa teen was diagnosed with juvenile diabetes just a month shy of her third birthday. Since then she has taken more than 11,310 insulin shots and twice as many finger sticks to keep the disease under control.

Recently Megan, who attends Jenks East Middle School, learned of the lack of funding for research about diabetes.

“I found out more people die from diabetes every year than AIDS and cancer combined,” Megan said.

About 16 million people a year die from diabetes while AIDS and all cancer deaths number eight million, according to information from the American Diabetes Association (ADA). Yet for every $7 of funding for AIDS and breast cancer, there is only $1 spent on diabetes, Megan’s mother, Kim, said.

After discovering that diabetes was not considered a national priority for funding, Megan took some action. She asked friends and family to sign petitions from the ADA in support of increased funding for diabetes. After gathering 1,927 signatures, the second most collected in the country, Megan sent them off along with a letter to President Bill Clinton in Washington, D.C.

Megan and her family later went to Washington, D.C., for a Rally for the Cure event. The rally brought a handful of supporters. The Koleber family were the only delegates to attend from Oklahoma. The family met with representatives in Congress to urge them to vote for more funding for research on diabetes.

Megan received an Advocacy Achievement Award from the ADA at the event for her work in making others aware of the disease. She also made her debut as a star. Megan is featured in a national public service video that tells how the disease affects her and how others can help.

Her latest project will let Green Country residents get involved with the fight for a cure for diabetes.

The eighth grader is the honorary co-chair for the upcoming America’s Walk for Diabetes. Megan will walk with about 100 classmates and many more Oklahomans to raise money for and awareness of diabetes.

The annual walk will begin at Utica Square in Midtown Tulsa on Sept. 20. Registration opens at 1 p.m. Walkers may choose a two- or five-mile route.

All proceeds from the walk will fund research projects, patient advocacy initiatives and education programs.

Immediately following the walk, participants can take part in a free health fair. At 6 p.m. walkers will be treated to a Concert for the Stars, a two-hour show featuring pianist and humorist Peter Simon.

Also, Megan will be collecting more signatures at the event for her next trip to Washington, D.C., for another Rally for a Cure event in the spring.