Megan Koleber, a sophomore, has taken the path less traveled for the last three years of her life. She was diagnosed with diabetes 13 years ago, but this disease has never won a battle against Megan. In fact, Megan is more than victorious. She is a hero!

Diabetes is widely spread throughout the U.S., and many of the students at Jenks can relate to friends or family members who have been diagnosed. Because of this, many owe a round of applause to Megan for representing the U.S. as the National Teenage Speaker for the Diabetes Association. Megan’s morals conflicted with the fact that “For every sever dollars AIDs and cancer receives diabetes is given one.” Nancy Pettus has a great deal of respect for her accomplishments, “She is devoted to promoting awareness and research.”

Megan’s decision to take up the cause was because Diabetes Magazine reported that diabetes was not a national cause. Megan entered a petition drive, and she received 2,000 signatures that year. Megan said that “11,000 petitions were submitted to President Clinton that year, and mine was on top.” In 1998, Megan attended the rally for the cure and spoke on Capitol Hill.

This will be her third year to represent our teenage population in the White House, and this year the American Diabetes Association’s Annual Report deemed Megan and Miss America, Nicole Johnson, the national advocates for diabetes. The awareness of diabetes has dramatically increased in the past three years with 3.2 million signatures collected through petitions. 11,000 of these were collected by our fellow student who is proud to declare that “It was the most signatures ever collected for a health organization.” 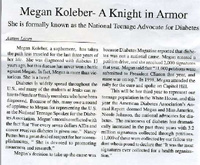